Updates to John's profile since your last visit are highlighted in yellow. 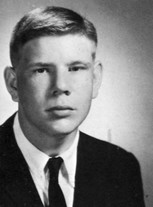 graduated from UT Austin, 1970. US Army 1971-72 , Camp Pelham, Korea. MBA from UNT, 1974. Worked as an accountant and controller 1975 - 2012. Retired in 2012. Married 1977 to Patricia Eichelberger, Fort Worth, TX . two children, Darlene adopted by Pat as a single parent, me a year after marriage. and Kimberly, 1979 now a CPA in Nashville, TN, Divorced 1991.
Married Laura Campos 2006, she had two children, Barbara and Carlo. They came from Peru. I enjoy travelling, studied several languages, Spanish, Portuguese, Italian, and Korean

Mike, it's been forever since our paths crossed. I got my BA from U t Austin, 1970, spent a couple of years with Uncle Sam in Korea, got my MBA from UNT, 1974. Married Pat in 77 divorced in 91. Remarried in 2006. I have 4 children, 1 born the others acquired. Oldest was adopted by my first wife before we met. Kim was born in 79, now has a baby of her own. Married Laura from Peru in 06. She has 2 children, Barbara b 80 and Karlo in 82. I do have 11 grandchildren and 5 great-grandchildren. I am retired living in Carrollton. I hope that all is well with you. Happy birthday, young Mcgilicudy.

Florence, you have always been a class act. From our first encounter at Franklin, you were always quite the lady. May this birthday find you well and may you live as long as queen Elizabeth, fitting for queen Florence. Bless you on your day, my favorite senator, at any level...

Allen. We knew each other since the first grade at Addison. I hope that you are doing well. I'm retired, living in Carrollton. May this terrible time not last and hoping that all is well with you and your loved ones. Mas

Sam, you are one of my oldest friends. Enjoy your birthday, same day as Tommy. I hope all is well with your family. May God bless you as always

Lynn, we met in the 2nd grade at Addison School, Me Blackmon's class. You have always been a beautiful and gracious lady. Happy Birthday and Thanksgiving as well.

Happy birthday dear lady. You are one of the best from our class. God bless you for all that you do.

Florence, I enjoyed our time at Franklin, Hillcrest, and UT Austin. You have always been a class act. Your service to this state has been remarkable. If you ever decide to run again, I'll support you. God bless you for your birthday. Mac

John, I remember you and your brother, Robert from our days at Franklin. My father, Sam played football at Forest High School with you father and uncle. Bye the way did your family own I'm Sorrento, the best restaurant in Dallas, ever. I hope that you're doing well. God bless, Mac

Bill, we have known each other since grade 1 at Addison. We were friends and does but we did play ball together from Y football at Kramer until Baseball st Franklin. No one can ever accuse of a big head because yours is. God bless you and your family. They were always good to all of us. Mac

Ann, happy birthday, to one of my oldest, intelligent friends. I remember you came with Andy to the Addison school the first time. We survived 12 years together at Addison. Kramer, Franklin, and Hillcrest. I remember your mother as the den mother of my cub scout den. You were always a good person and remain true that to this day. Another memory was going to Bacculaureate together. God bless you on this day and forever more. Mac

Kathy, I was in your homeroom for several years, Ms Davis (Art) and Tessie Cox (Hillcrest). I retired 4 years ago, 40 + years as a controller for small companies. I have a BA from University of Texas, Austin (Economics) and an MBA from Univ of North Texas (Finance). I married a nursing educator, Pat Eichelberger, She is now the executive director of a Nursing Honors Fraternity. We had two girls, Darlene (adopted) and Kimberly my brilliant child. We divorced after 14 years, and I married Laura Campos (Peru) 10years ago, She had two children Barbara and Carlo. I had back surgery last month, and will have heart Cath next weel. We are fortunate, no cancer in my immediate family, but we all have heart issues. I should be ok, and look forward traveling and spending time enjoying my grandchildren (10). May God bless you and keep you well. We live in Carrollton, Mac Thompson